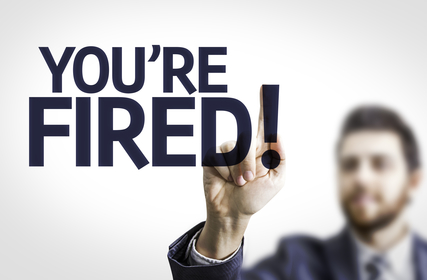 Have you ever been in the middle of an audit engagement with severe issues and thought, “This is the audit that will get me fired!”?  I know what you’re thinking, “That’s absurd”.  After all, who would fire auditors for doing the job you hired them to do?

In a perfect world, the Office of Internal Auditing reports to and is accountable to the Board, usually via a subcommittee (i.e. the audit committee).  This gives  the auditors the authority and independence to fearlessly analyze process and objectively report the results.

In the real world, this becomes problematic when the oversight authority is weak and does not fulfill its oversight responsibility.  This occurs when management has too much authority and control over the audit function.

My friend John (not his real name) Doe told me about a sticky situation he faced.  He worked in a large organization with a sizable information technology (IT) budget. The Director in charge of information technology hardware purchased several hard drives and checked them out for at home use.  Turns out, the director does not use the equipment for company business.  Instead, his wife uses the equipment to store files for her photography business. After more digging, the audit team discovered that the company had also paid for a laptop and photography classes for the “Director”.  After verifying the facts, John informed management about the personal purchases.  He was told that both individuals were related to a high level executive.  Then he was called into a meeting where he was told to cease and desist.

John pushed on.  The executive sent the corporate attorneys after John.  The hurled every threat in the book at him.  His team ducked and dodged the threats.  Working late nights and weekends, they eventually had enough evidence to expose a multi million dollar fraud.

At some point, John was able to present the case to an objective executive.  When he did, the fake wannabe crime boss family was fired.  However, this was not before dragging the audit department through the mud. In the end, John was glad the family was fired.  Otherwise, he was considering employment  elsewhere.  Afterall, he did not want to work for an organization that would condone the type of behavior revealed in the investigation.

Quite often auditors must be bold and brave when conducting business.  There are consequences for business bravery.  However, doing the right thing trumps unethical, immoral behavior. If an organization decides to terminate you for doing the right thing, it was not the place for you.  There are three things to consider when facing a challenging decision.

You Have Moral Standards

A man who stands for nothing will fall for anything.

This was a great quote attributed to a few people including Malcolm X.  Auditors frequently face situations where we must stand up for what is right in the face of adversity. The executive challenged John not based on the situation but because of family relationships. But the last time I checked, stealing is wrong…period.  Know your moral standards and stand on them.

You Have Professional Standards

Auditors, accountants and most business professionals have professional standards that define expectations for their profession.  For internal auditors, the Institute of Internal Auditors (IIA) sets forth the standards that govern the profession.  Auditors are bound by a strict code of ethics  Even if John had no moral standard, he remains bound by the IIA Standards and code of ethics which requires him to report fraudulent activity.

You Have the Truth

Clients oftentimes challenge the truth as a defense mechanism. They exhibit childlike behavior such as yelling, deflecting and name calling.  However, I challenge you, if you know the truth, don’t let cowards move your moral compass.  Stand for something.

Auditors oftentimes deal with sticky situations. Sometimes we become aware of immoral or illegal situations.  Bad management teams will attempt to downplay this activity.  Auditors are bound to do what is right, even in the face of potential termination.  You should never fear being fired if you know and follow your moral compass, know your professional standards and know the truth.